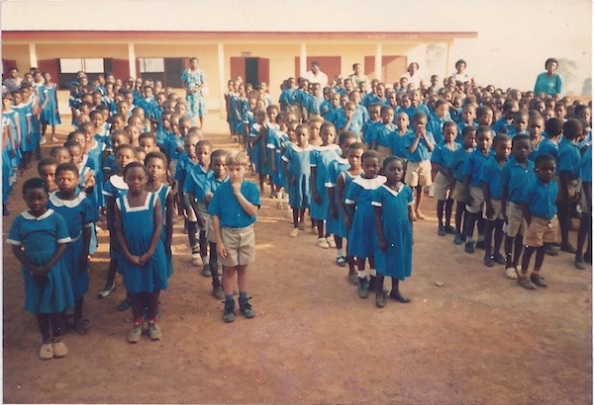 I grew up in what is probably one of the least racially diverse places on this planet. Until I graduated from high school, I never had a white classmate. In fact, I did not know I was white for a good period of my childhood, despite the unmistakable fact that my family stood in stark contrast to the world around me.

My mother is part Iranian and part Iraqi, and my father is a good ol’ white boy from Baltimore, Maryland. As all good stories go, my parents met at an obscure conference in Cameroon during the late 1970’s, fell madly in love, and decided to spend the rest of their lives in a country they knew nothing about.

Growing up, I was called many things that helped shape my identity as a young adult. I was very young when the neighborhood children started calling me white man, which I found stupid since I was still a boy at the time. What made it even more unbearable was the song that accompanied the name calling – white man, white, white man. White man with your long nose. Since my motha born me, I’ve neva seen a white man. I imagine that there would be something amusing, even cinematic about a little white boy being escorted by a dozen or so black children chanting that song in unison. I would sometimes turn around abruptly without warning, and they would all scatter away like pollen on a windy day.

It’s a mystery where that song originated, but it was sung in every neighborhood and quartier I set foot in. It must have belonged to that class of communal art forms that took multiple generations to perfect through intermittent interactions with those poor white souls who provided the right amount of ammunition and inspiration for its continual evolution. It didn’t matter if one’s heritage was Indian, Chinese, Persian or Iraqi, one was considered white by reason of not being black. It was a simple, and maybe even more accurate way of categorizing the world.

In their awe, children also called me sarra. They would see me coming in the distance, and call out, “na sarra! na sarra!” and more children would start emerging from behind the trees and houses along the roadside. Very soon, a large contingency of children would form around me, and a few courageous ones would reach out to touch my hair or run their fingers down the sides of my arms. I was theirs to keep, and I usually gave in to their curiosity for a short while before scaring them away with my sudden movements.

As an adult, I can’t disparage any of the gross attention I received, and even as a child, despite my own angst towards it, I recognized that there was an innocence to that sort of attention that transcended racism, and even alienation. After all, I was an anomaly for most people, not only because of my skin color, but because I was born in Cameroon. I was delivered in the same dilapidated government hospital as many of my friends, went to the same schools, ate the same food, drank the same unfiltered and over-chlorinated water, used the same latrines, and shared in the same awe whenever encountering one of my fellow whities. I, too, felt a similar degree of foreignness that many of my friends experienced with me whenever I encountered other white children who had come to Cameroon as “expats” with their parents. Despite our non-blackness there was little we had in common, and I had a hard time understanding why they would sometimes speak in condescending undertones about the people I considered to be my friends. It’s clear now that my own identity was rooted in the very people who saw me as an anomaly.

I hadn’t always seen myself as being white. In fact, it took a few years for that consciousness to be planted in my mind. I remember coming home one day after school, and staring at myself in the mirror of my parents’ bathroom. I must have been around six at the time. It was the middle of the dry season, and my entire body was covered in dust. I would get so dirty that time of year that my bath water would literally turn brown. My mother entered the room at that moment, and I think she must have been perplexed as to why I was looking so intently at myself. She asked if I was feeling okay. When I didn’t respond, she asked again, and in a voice that failed to conceal my great disappointment, I said, “They are right. I am different.”

I can’t remember exactly how that moment changed the way I related to the world around me, but I know that it did. As a child, I navigated multiple cultural realities with ease, not caring so much whether I fit in or not. However, as I grew older, I craved for that elusive sense of belonging. Many of my closest childhood friends were other anomalies like me, children of Indian, American, Persian, German, and multi-racial descent, but, nonetheless, we were all Cameroonian to varying degrees – one foot in, one foot out; half foot in, one and a half foot out. As my teenage years crept by, my identity became increasingly rooted in an awareness that I never truly belonged anywhere.

As a child, my parents and I would spend our summers in Baltimore with my grandparents, who were originally from the south. In America, I was also an anomaly, but in a different, more subtle way. In America, children didn’t notice me like they did back home, but when they heard me speak, they would immediately ask me where I was from. They would ask if lions roamed the streets, and if people lived on trees. I’d tell them about the lions I’d seen at the Baltimore zoo, and that from the top of my tree, I could see for miles and miles, and all the faces were as black as mine.

Ron From Texas
Letters to Cameroon

Poems and Essays by Viola Allo