Where are you from?

Cameroon? But you are white.

Yes, I know that.

Ok, but where are you really from?

Ok, you’ve said that, but where are your parents from?

So, what are you… American or Iraqi?

I don’t know. Does it matter?

Because, you have to belong somewhere!

You must be an American!

What does your passport say?

Then, you are American!

Ok. I am American, but I am also many other things.

You cannot be two things at once.

Do you vote in American elections?

So you voted for Bush.

My voting is my concern.

My people? What’s your point?

It wasn’t everyone’s choice. Many people protested the war.

Yes, but the people voted for Bush, and he wanted oil for the cars your people drive.

Listen, what are you getting at? This doesn’t make me responsible for the things a few people did.

It doesn’t matter what you want Ramin. You can think you are Cameroonian, but you can only vote in American elections. You only determine what happens in one country.

And the people in Cameroon? Do they determine what happens in Cameroon, even though they have, quote unquote, voted for the same man for the last 30 years?

They do, but not politically. There’s more than one way to determine what happens in the world. You might think that politics alone determines where someone belongs, but you are absolutely wrong. Blood, not politics runs through our veins, and after all, you of all people should know that we are all children of Adam. I am no less African than you, sir! 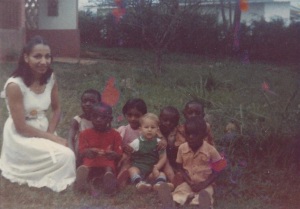 A Journey in Love through Life and Death